⚠️ This article is extreme & satirical on the purpose of being thought-provoking. Therefore, please, do take it with some grain of salt.

This is a followup of my Remote-mostly working is a paradigm shift.

Why I hate work meetings

My #1 advice about distributed teams is actually even the case in colocated teams: Try as hard as possible to avoid meetings, use textual IM instead as meetings are where work goes to die. I know it sounds pretty dull, but if you really think about it you’ll see that it’s usually wasted time. The usual pattern of decision taking is:

Postponing the decision is usually what one really wants, even unknowingly: “to be able to have an excuse not to decide at once”.

It’s a very very fair humane reaction, I also fell myself into that trap. 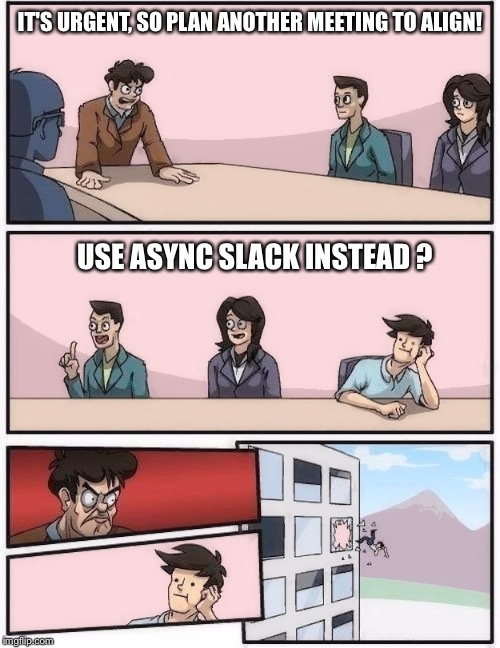 I end up having the following workflow:

Usually the why of decisions are not provided in a “build the sausage” manner. But after a while, the hypothesis of the decision are not true anymore, and therefore another decision has to be taken.

This is not possible when loss of information occurs and that’s when Cargo cult begins to creep in.

In a record-everything scenario, context switch is just a matter of reading back some previous messages. Otherwise you’ll spend numerous times “explaining the context” in a meeting to everyone. And then everyone will just move to something else, and you’ll have pitiful engagement, while still spending time on it.

A company that use its time effectively, is a company that moves much faster than its competitors, no matter the skillsets in that company. Even if you have the brightest minds, if you waste their talents in boring activities, you’ll dry them up. And either they’ll leave, or worse, they quit & stay.

That’s why “startups” are so effective : they are small and therefore very fast. Being fast brings capacity to try & fail, and therefore agility.

💡 time is the only really scarse resource in a company : you can’t buy it back, no matter the price.

Why you should only have fun ones

That said, I do agree that travelling is necessary. But we should name the real usecase of travelling : having fun together.

The nicest part of that purpose is :

The most used reason for meetings is “alignments”, but it is very usually wasted as :

The “there’s always someone missing from that meeting” is the worst part, as usually, that is the one that says “what you decided cannot be done”. And you’ll end up with yet another round of thinking at best. At worst you’ll try to shoehorn your precious alignment (that did sink a huge travel budget) into the needs of that missing person.

💡 We can draw a parallel to the paradigm shift I mentioned earlier:

Now, one immediately notices the following:

You can plan them in advance, and you won’t have over-budget ones. As their outcome is predictable, and if there’s someone missing, it won’t jeopardy the whole travelling.

A final word of caution, the reference to scaling is not about runtime performance. It’s more about organisation size. As Martin Fowler said : don’t even consider microservices unless you have a system that’s too complex to manage as a monolith.

So, it usually makes very much sense to start with a small, colocated team, that has traditional meetings. The trick is to recognize the need to change the paradigm when the team grows, as it always done smoothly over the months. Just don’t forget to have good meeting hygiene (written inputs & outputs), as even monoliths should be nicely modular.

I posted those 2 articles (Remote-mostly working, Effective Meetings) internally to my company some years ago, but I’m republishing those publicly to help others the same way it helped us.